In the wake of the ruling on Roe v. Wade DICK’s Sporting Goods announced a new policy in which they would pay up to $4,000 in travel expenses for employees seeking abortions.

DICK’S Sporting Goods CEO Lauren Hobart sent out this memo after the ruling. 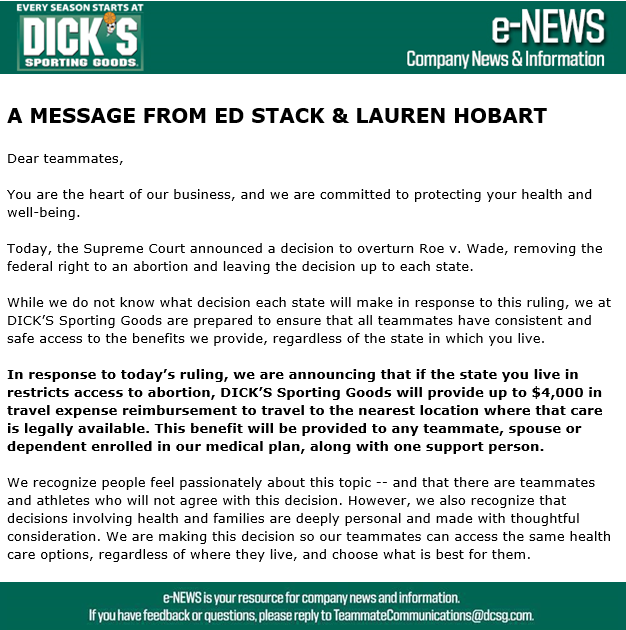 A Conservative legal group is now taking them on.

America First Legal has announced they are suing them over the abortion policy. They are also targeting them for adopting “explicit racial quotas.”

The complaint was filed via AFL’s Center for Legal Equality, which fights institutional bigotry. If YOU are a victim of “equity” contact us NOW: https://t.co/FE6Cxb1qnC. 2/2

Today, as part of its initiative under the AFL Center for Legal Equality, America First Legal (AFL) asked the U.S. Equal Employment Opportunity Commission (EEOC) to open a civil rights investigation of DICK’S Sporting Goods, Inc. for multiple violations of Title VII of the Civil Rights Act of 1964, as amended by the Pregnancy Discrimination Act of 1978.

Following the Dobbs decision, DICK’S announced a special employment benefit of “up to $4,000” in travel reimbursement for a employee, spouse, or dependent, along with one support person, to obtain an abortion. Although Title VII prohibits discrimination based on childbirth, DICK’S does not offer an equivalent paid benefit to a mother who has her baby.

According to America First Legal, DICK’s Sporting Goods is “recruiting, hiring, and/or promoting workers because of race, color, national origin, or sex.”

In addition to the abortion complaint, America First Legal claims that, as stated in the company’s official documents, Dick’s is “specifically recruiting, hiring, and/or promoting workers because of race, color, national origin, or sex.”

According to their website, the retail company has set goals to “increase BIPOC representation in leadership roles by 30% by 2025,” and “increase overall representation of women in store leadership to 40% by 2025.” They also hope to “achieve 50% BIPOC and/or women for entry-level hires for technology roles by 2025.”